In the middle of the last century, Europe, the United States, Japan, and other countries have begun to realize the importance of environmental protection while rapidly developing their industries. They have successively formulated various "recycling economic laws" to create a recycling economy and realize sustainable development. aims. Multinational governments, the European Union, etc. have actively played a guiding role. On the one hand, laws and administrative means have clearly stipulated the environmental protection responsibilities of enterprises and the public. On the other hand, public awareness and school education have been used to cultivate people's awareness of environmental protection.

This article gives a basic introduction to the latest legislation and status quo on the recycling of plastics in Europe, the United States, and Japan. 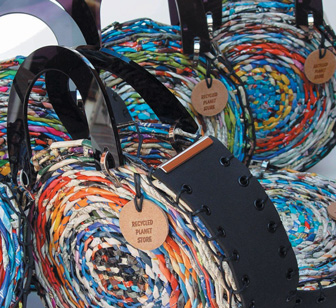 Plastic packaging can be recycled in many different forms. (Photo courtesy of Photo CourtesyRecycled Planet Store)

At present, many European countries have taken the lead in recycling. For example, Germany, Switzerland and Belgium have basically exceeded the benchmarks of this new directive. Although the new directive aims to increase the proportion of recycling, it has to some extent been hampered by many resistances. For example, some member states must adopt long discussions and legislative procedures to implement the new directive. As of August, only the United Kingdom, Austria, the Czech Republic, Germany, and Luxembourg have confirmed that the new directive will be included in their environmental regulations.

Switzerland is a model for plastic bottle recycling

Switzerland is the first country in Europe to recycle plastic products. Since the industrialization of plastic products, the recycling of this renewable resource has become a topic of great concern to the local community. The Swiss Federal Government has also adopted a series of measures accordingly. Taking waste plastic bottles as an example, there are more than 15,000 recycling centers nationwide, and the national recycling rate has exceeded 80%, far exceeding the EU-established 50% standard and the more common 20-40% recovery rate in other European countries. In addition, there are five large-scale plastic recycling, sorting, and processing centers throughout the country. The processing capacity of the newly-built processing center in Vaud can reach up to 150,000 plastic bottles per hour, and plastics of various colors are processed into new plastics. material.

In addition to Switzerland to follow the circular economy 4R (Reduce - Reduction, Recover - Renewable, Reuse - Reuse, Recycle - recycle) principle, but also through national legislation to require the recycling of renewable resources. The Swiss Federal Government has formulated a number of regulations to regulate the specific work of developing a circular economy. In addition, Switzerland also established a number of civil society associations to form a private environmental protection network to strengthen the links between recycling organizations. The association plays an important coordinating role in the entire recycling system with its independence and professionalism.

Although the demand for local food and beverage packaging is strong, the recycling of plastics in the UK is far less than that of Switzerland. According to a report by the British Food Daily daily (foodproductiondaily.com) in August this year, the British government has recently announced that it will incorporate the latest EU guidelines into the country's regulations. In this regard, the British Food Industry Association recently held its second meeting to discuss the impact of this latest directive on the British food industry.

The United Kingdom plans to meet the targets set by the new directive by 2008. The current recycling system in the United Kingdom requires that packaging companies, such as plastic bottle manufacturers, must achieve a preset recycling rate standard before they can start production. For companies that have a turnover of more than 2 million pounds (29.61 million yuan) and produce/process more than 50 tons of packaging materials, they must achieve a certain recycling rate every year.

U.S. Focuses on the Safety of Recycled Plastics Used in Food Packaging

The United States, the worldâ€™s largest consumer of plastics, recently paid special attention to the health and safety issues of recycled plastics used in food packaging. The United States Food and Drug Administration (FDA) has been promoting the recycling of plastics, but when recycled plastics are used in food packaging, it involves a series of health and safety issues that have to be watched by the authorities.

The FDA is concerned that there may be bacteria in recycled packaging plastics, or may contain non-controlled materials, in violation of food packaging safety guidelines. In this regard, the FDA recently published a guideline entitled "Caution Points for Recycling Plastics in Food Packaging: Chemical Considerations." The FDA pointed out in the "Points" that all recycled plastics must be approved by the authorities in the food packaging process; regardless of whether the recycled plastic products produced in the recycling process can be used in food packaging, they must be reviewed in advance to ensure safety; The supplier must also fully submit all relevant information on the food packaging and recycled materials to the FDA, including the source and source of the recycled materials, relevant descriptions, detailed processing techniques, etc., to ensure that the plastics are in compliance throughout the process and are not contaminated during processing. .

Japan is also a big consumer of plastics, with an annual output of more than 11 million tons, and it also produces 9 million tons of plastic waste every year. In 1997, Japan established the regulations for container packaging recycling, requiring consumers to classify wastes, and provinces and municipalities will recycle them on separate days, and recycling companies will recycle them to receive government funding for working capital. Japanese domestic waste is classified and put into transparent bags. It is collected by the recycling company at a designated place on the designated day and sent to the factory. The plastic bottle will be processed into daily supplies such as clothes racks and garbage cans. It is quite practical.

According to figures from the Japan Container and Packaging Recycling Association, 34.5% of the 360,000 tons of plastic bottles in Japan each year can be recycled, far exceeding 22.3% in the United States and 22.0% in Europe. The association expects that the recycling rate will increase to nearly 50% in the coming years. Earlier this year, a number of Japanese beverage processors and plastic bottle manufacturers formed the Plastic Bottle Recycling Promotion Association and decided to stop production of color bottles that affect recycling, and set a one-year transition period after implementation.

In view of the above-mentioned developed countries such as Europe, the United States, Japan and other countries, governments in various countries are implementing both plastic and soft plastics in recycling waste plastics. On the one hand, laws and regulations stipulate clearly the behaviors of enterprises and individuals. On the other hand, through social propaganda activities, public awareness of environmental protection and recycling is raised. For example, the use of mass media to promote circular economy, strengthen the education of environmental protection courses in primary and secondary schools, and use â€œEnvironmental Protection Dayâ€ activities to create momentum for the green revolution. In addition, many countries have adopted the following soft solutions to reduce waste and increase recycling rates.

Improve the use of plastics. For example, more than half of German industrial companies have redesigned more simple and practical packaging, such as eliminating the need for second-tier packaging to reduce plastic waste. Another example is that in 1994, DuPont Co., Ltd. reduced or eliminated 25% of the plastic waste generated from production by reducing or eliminating the use of certain hazardous environmental chemicals and recycling of the company's products. The amount of air pollutants was reduced by 70%.

Civil organizations play a promoting and complementary role. Semi-government, industry, community, non-governmental monitoring and other social groups play an active role, including responsible for waste recycling and assisting in legislation. Some non-profit-making organizations, such as Japan and Switzerland, which specialize in waste recycling, are generally formed through consultations between industry associations and large packaging companies. The operating funds are mainly based on the dues and back-charges paid by member companies, which were then retired or returned to enterprises. Or used to fund research in related fields. Some non-governmental organizations in the United States have full-time staff and have clear goals in the near and medium term. They can often form pressure groups outside the House of Representatives, influence the formulation of decisions at all levels of the state and the federal government, and participate in and assist in the drafting of relevant laws.

Double Sided Adhesive Tape is used in electronic, hardware, plastic, printing, and other industies. Two sided tape with high adhesion on both smooth surface, easy to install and remove by hand without leave any residue. The thickness of Double Sided Sticky Tape is from 80 to 200 micron, the width is from 12mm to 70mm, the length is 10 to 100 yards. Could make custom double sided tape.